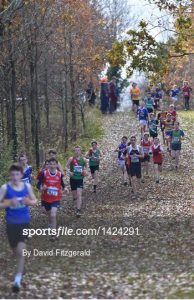 The Irish Life Health All-Ireland Championships for Senior & Juvenile (even ages) took place at the National Sports Arena grounds in Abbotstown last Sunday. On what was a perfect day for running – dry and little or no wind – a record crowd turned up to witness a top-class day of athletics. Indeed, such was the turnout that there were massive traffic tailbacks from the M50 to the grounds. Unfortunately, this contributed to some of the younger athletes missing their races notwithstanding the start times being put back. Given that all athletes qualified out of their provinces for the right to compete at the Nationals this caused no little amount of distress.

As regards the racing the bulk of the media attention was on the Senior races as these were being used as qualifiers for the European Cross Country in Slovakia on 10th December. Our top performer in the Women’s race was Fiona Kehoe (Kilmore AC) in 23rd place. Elizabeth Egan also competed in the Women’s race while Michael O’Flaherty (Kilmore AC) was our sole representative in the Men’s race. 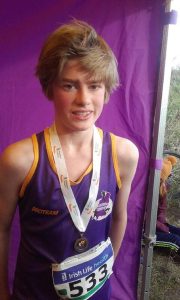 The real interest, from a Wexford point of view, was in the Boys U14 3000m. At the Leinster Championships in Navan in October Myles Hewlett (United Striders AC) won a Silver medal behind clubmate Aidan Shannon, while both the USAC and County teams won Gold. Myles subsequently took another individual Silver in the Leinster U13 race in Adamstown, leading both club and county to Silver medal finishes also. No pressure then! Miles got stuck in from the start, didn’t let the sticky underfoot conditions phase him and romped home for an excellent 12th place finish and an individual medal. His clubmate Darragh Flannelly followed up his fine run in the Leinsters to cross the line in 18th place. Wexford Chairman Paddy Morgan, who knows a thoroughbred when he sees one, says Darragh is definitely one to watch. Adamstown athlete Ben Wall was 32nd, Cosmo Hewlett (USAC) 38th, James Hegarty (DMP) 61st, Eoin Shannon (USAC) 64th, Finbar Kelly (USAC) 84th, Aidan Shannon (USAC), who won the Leinster U14 race and placed 9th U15 was very much below par in placing 107th, David Kirwan 123rd and Robert Wall 126th. Striders on 132 points went one better than their Leinster performance in taking the Gold for top Club Team, 7 points clear of Spartans/City of Derry, with St Senan’s AC in 3rd. The Co Wexford team placed 2nd behind a strong Dublin team with Kilkenny City Harriers in 3rd. To crown it all, both Myles and Darragh made the Silver medal winning Leinster team.

Head coach, Ted Flannelly, was naturally delighted. “A national gold medal is a great reward for the boys as they have trained hard for a number years to get to this level.”

In the Girls U14 Claragh Keane (DMP) placed 27th. With her season going brilliantly up to now (3rd in Leinster CC) she may have been expecting to place higher. Her trademark efficient running style a good cool head for tactics make her a natural cross country runner. The advice from Chairman Paddy is that all she needs to do is bide her time and it will come together for her.

Conn Mernagh (DMP) was 21st in the Boys U12 race while clubmate Kevin O’Mahoney was back in 61st.

Aedan Rogers (USAC) and Liam Turner (DMP) competed in the combined U18/Junior race. The pace was fast from the get-go as some of the top Juniors were running for a place on the European CC team. Aedan, who placed 27th in the U18 race, was 5th man home on the winning Leinster team. Another Gold for Striders! He was very happy with his run and, of course, over the moon at making the winning provincial team. Liam, finishing a little further back, was also happy with his run.