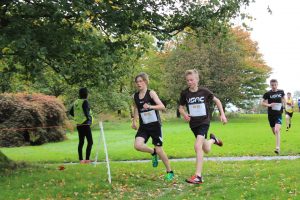 JFK Park was the venue last Sunday for the first day of a new season of cross country championship action in the county. Hosted by United Striders AC, the Mr Oil Wexford Juvenile (Even Ages) and Novice Cross Country Championships were held in glorious conditions with the sod largely unaffected by the previous day’s rain. There were some very competitive and hard-fought races starting with the U10 non-championship runs. The highlight was the Boys U14 3000m in which a battle royal between USAC clubmates, Aidan Shannon and Myles Hewlett, saw Aidan shading it in a sprint finish. Both boys looked very impressive and both will be hoping to make an impact at Leinster level. 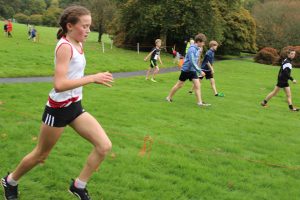 Claragh Keane (DMP) was a class apart in the Girls U14 race. Running with her trade-mark efficient metronomical style she made light of what was a deceptively demanding course. Róisín O’Reilly, with her easy lopping stride, was no less impressive in how she won the U16 race. In the Boys U16 4000m Joe Byrne of SBR left it until the second of three laps before stamping his authority on the field and galloping to a facile victory. When it comes to the country Joe is King! 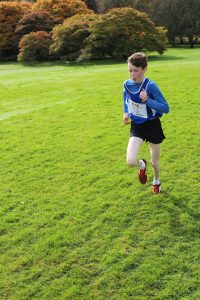 The Girls U18 4000m race was not unlike one of those bicycle races on the velodrome – start slow, keep it slow for as long as possible, then launch a blistering final kick to the line. This is exactly what Kate Byrne (USAC) did to leave her fellow Strider Rebecca Bawden in her wake.

In the Novice Ladies 3000m race Kilmore AC’s Fidelma Rossiter broke away from a well strung-out field on the final lap and stormed home for a convincing victory. With three athletes fighting for the final two podium spaces the Striders pairing of Sonya Byrne and Ailish Browne came out on top to take second and third respectively. Slaney Olympic took the team title, by just three points, from United Striders. 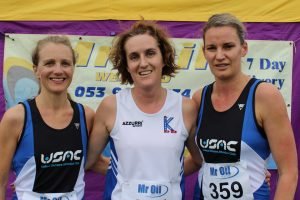 The Boys U18 race was run, with the Novice Men, over 6000m. Aedan Rogers (USAC), competing U18, took it up from the start and stretched his lead right to the finish. He was followed home by clubmate James Boland (USAC) and Edward Kinsella (SBR).

Completing a good day for USAC was Alan O’Connor who took the County Novice title with team-mates Brendan Lyng and Mark Poole taking second and third spots. Not surprisingly the club took the team title also. 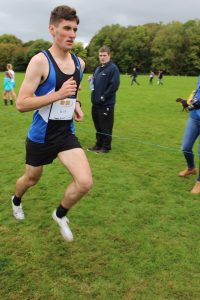